Sigma is the measure and Six is the goal.

What is Six Sigma? Let’s start with just the “Sigma” part first. In statistics, “sigma” refers to standard deviation which is a measure of variation. Throughout the six sigma certification course you will come to learn that process variation is the enemy and reducing it is key to any quality process. You will also come to learn that in order to do so you will need to understand it, manage it, and minimize it with the many tools and methods you’ll learn in your six sigma certification course. Now, about the Six part. “Six” Sigma is actually an aspiration or goal for process performance.

The image below shows what the distribution of outputs looks like for a process that performs at Six Sigma. You will notice that the mean of the distribution is six standard deviations away from the nearest customer specification limit. 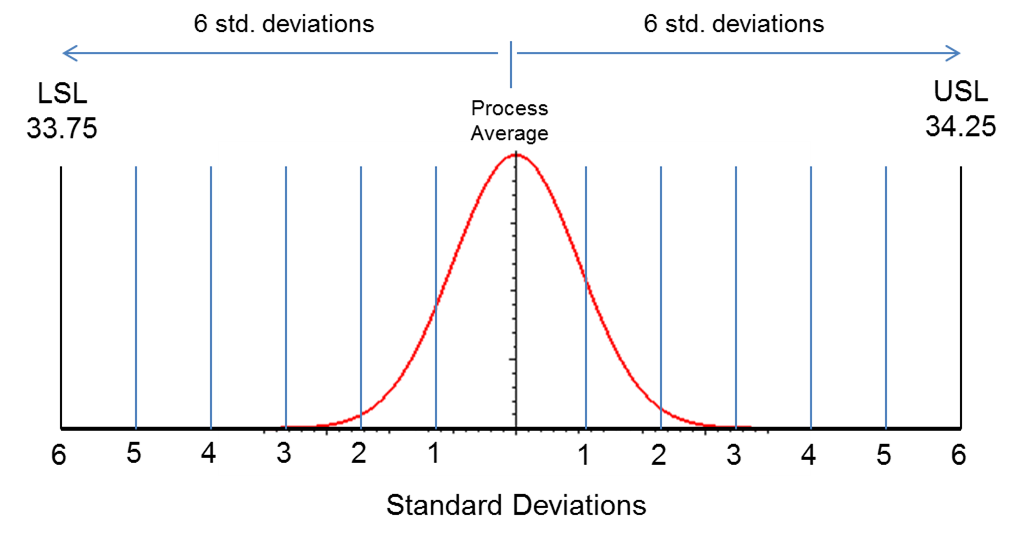 As a result, a Six Sigma process only yields 3.4 defects for every million opportunities! In other words, 99.9997% of the products produced by a Six Sigma process are defect-free! Let’s take this concept a little further. You just learned that Sigma level measures how many “sigma” there are between your process average and the nearest customer specification limit. Suppose your customers upper & lower specifications (USL & LSL) were narrower than the width of your process spread as depicted by the image below.

In the case above, the USL & LSL are about 4.25 standard deviations away from the process average. Therefore, this process operates at 4.25 sigma. Although it appears that the distribution fits well inside the spec limits, a process performing at 4.25 sigma is good but it will have a process yield of about 99.97% or 3000 defects per million opportunities. On the other hand, a 1 sigma process is very different. It will have a defect rate of about 70% or nearly 700,000 defects per million opportunities (Ouch!).

So what is Six Sigma?? Sigma is the measure and Six is the goal.