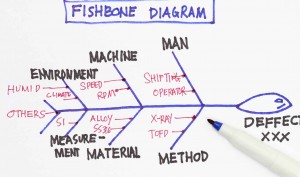 During your Six Sigma education journey, numerous tools are taught and provided to help you solve problems and identify solutions. The skills learned during your six sigma training will help you understand when and how to use each of these six sigma tools.

While working through each DMAIC phase, there will be certain tools that are used more often than others. You’ll find that using these tools to further your exploration into a problem, and arriving at solutions, will eventually become second nature.

The Pareto chart uses the Pareto principle which states that a majority of problems come from vital few causes. This principle established by Vilfredo Pareto an Italian economist originally stated that 80% of the land of his country was owned by 20% of the population. This 80/20 rule has generally held for decades since his initial observation. As a result, the Pareto chart has been cemented as one of the more popular, simple, and effective six sigma tools used to help identify root cause. It provides for the creation of a very informative visual representation of defects or sales etc. (depending on how it’s used). By using the Pareto chart in successive applications, you can perform several levels of Pareto analysis making the Pareto chart a very commonly used six sigma tool.

When defining the current state of a process, creating a process map is one of the most useful ways to get a clear understanding of how work flows. A process map can help identify where rework and waste occurs and, as a result, where there may be room for improvement. In addition to a high-level process map, six sigma projects often require detailed and functional process maps, all of which can be beneficial for identifying areas where work breaks down. Additionally, many other valuable tools rely on the process map (FMEA, SIPOC, Value Stream, etc.). Because of this versatility and its effectiveness, the process map holds a firm position among the ten most used six sigma tools.

In a six sigma project, the FMEA works as a tool and as an analysis technique that will identify, evaluate, and prioritize areas in a process that may be deficient. The tool requires the team to clearly map out areas where a process can go wrong and where process breakdowns can happen. The FMEA as a six sigma tool is not difficult to use but, when done correctly, takes a fair effort and attention to detail. The activity of completing an FMEA pushes teams to identify and rank potential breakdowns and then demands that the team create a recommended mitigation plan to proactively manage potential failure modes. The FMEA finds application in all kinds of different places, from business process, technology systems, to product design and even military mission planning. Therefore, the FMEA holds its own and deserves a home on the top 10.

5. Cause and Effect Diagram

A useful six sigma tool to compare the medians of two or more populations is Mood’s Median. This non-parametric test is an additional way to test a hypothesis when trying to compare non-normal data such as cycle times over three different lines of production. The Mood’s Median test determines if the medians of two or more population samples are the same or not. Because you will often run into situations where your data are not normally distributed, the Mood’s Median test will find its way into your six sigma tool box.

When trying to test if there is a statistical difference between the means of two samples, the “2-Sample t” test is the go-to six sigma tool. Used when there is a need to compare two levels of a continuous variable, the 2-Sample t was designed to be applied when variables are independent of one another. However, because it can be used when variances are equal and alternatively, when variances are unequal, it stands out as a more commonly used six sigma tool among the numerous other statistical analysis tools.

Simple linear regression is used in six sigma projects when a quantitative relationship between two variables must be modeled. This analysis describes how one variable changes according to the change in another variable, allowing for continued analysis on changes within a process. The simple linear regression provides for a quantified relationship between two continuous variables and can be expressed in an equation, making it applicable to six sigma professionals who seek to “dial-in” improvements. Regression, in its simple form, makes this list because of its elegance and effectiveness while not burdening others with overpowering and dense statistical analysis.

As a management planning tool, this six sigma tool identifies, describes, and monitors process performance metrics to ensure they are meeting customer requirements. Creating a control plan will enable the project team and/or operations management to monitor improvements for stability over the long-term. This plan is critical to the longevity and success of the implemented solution. Unfortunately, the control plan is often overlooked and may not be on your top ten list of six sigma tools. If this is the case you’re missing the boat, the control plan is a must among the class of tools critical for their purpose. Make sure it’s in your tool belt and ready for use…often.

As far as control charts, the Individual and Moving Range control chart (I-MR Chart) is the easiest to use and understand, while also being one of the more flexible and versatile control charts. Its use as a six sigma tool enables the identification of process stability or instability. It’s applicable to continuous data, and robust to non-normality, making it a very commonly applied control chart.

While there are many tools available to green belts, black belts, and master black belts, these ten tools are the most common. While all projects are different and require unique applications for their own purposes, you’ll be hard pressed to find a project managed by a six sigma professional that does not at least use three of these ten effective six sigma tools.