What is Simple Linear Regression?

Simple linear regression is a statistical technique to fit a straight line through the data points. It models the quantitative relationship between two variables. It is simple because only one predictor variable is involved. It describes how one variable changes according to the change of another variable. Both variables need to be continuous; there are other types of regression to model discrete data.

The ordinary least squares is a statistical method used in linear regression analysis to find the best fitting line for the data points. It estimates the unknown parameters of the regression equation by minimizing the sum of squared residuals (i.e. the vertical difference between the data point and the fitting line).

In mathematical language, we look for α and β that satisfy the following criteria:

The actual value of the dependent variable:

The fitted value of the dependent variable:

By using calculus, it can be shown the sum of squared error is minimal when 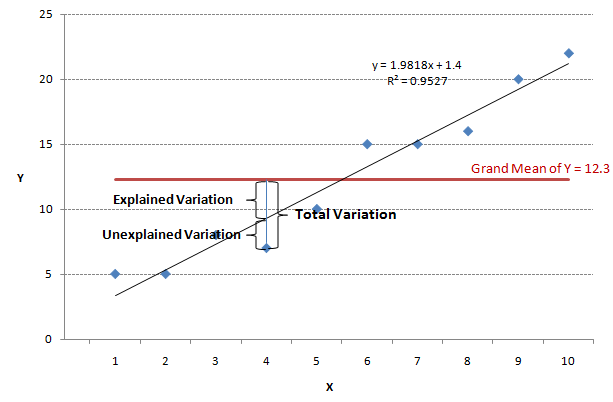 The variance in simple linear regression can be expressed as a relationship between the actual value, the fitted value, and the grand mean—all in terms of Y.

Regression follows the same methodology as ANOVA and the hypothesis tests behind it use the same assumptions.

Whether the overall model is statistically significant can be tested by using F-test of ANOVA.

R-squared or R2 (also called coefficient of determination) measures the proportion of variability in the data that can be explained by the model.

Use Minitab to Run a Simple Linear Regression

Step 1: Determine the dependent and independent variables. Both should be continuous variables.

Step 2: Create a scatter plot to visualize whether there seems to be a linear relationship between X and Y.

Step 4: Check whether the model is statistically significant. If not significant, we will need to re-examine the predictor or look for new predictors before continuing. R2 measures the percentage of variation in the data set that can be explained by the model. 89.5% of the variability in the data can be accounted for by this linear regression model. “Analysis of Variance” section provides an ANOVA table covering degrees of freedom, sum of squares, and mean square information for total, regression and error. The p-value of the F-test is lower than the α level (0.05), indicating that the model is statistically significant.

The p-value is 0.0001; therefore, we reject the null and claim the model is statistically significant. The R square value says that 89.5% of the variability can be explained by this model.

The estimates of slope and intercept are shown in “Parameter Estimate” section. In this example, Y = 15.6 + 1.85 × X, where X is the score on Exam 1 and Y is the final exam score. One unit increase in the score of Exam1 would increase the final score by 1.85. 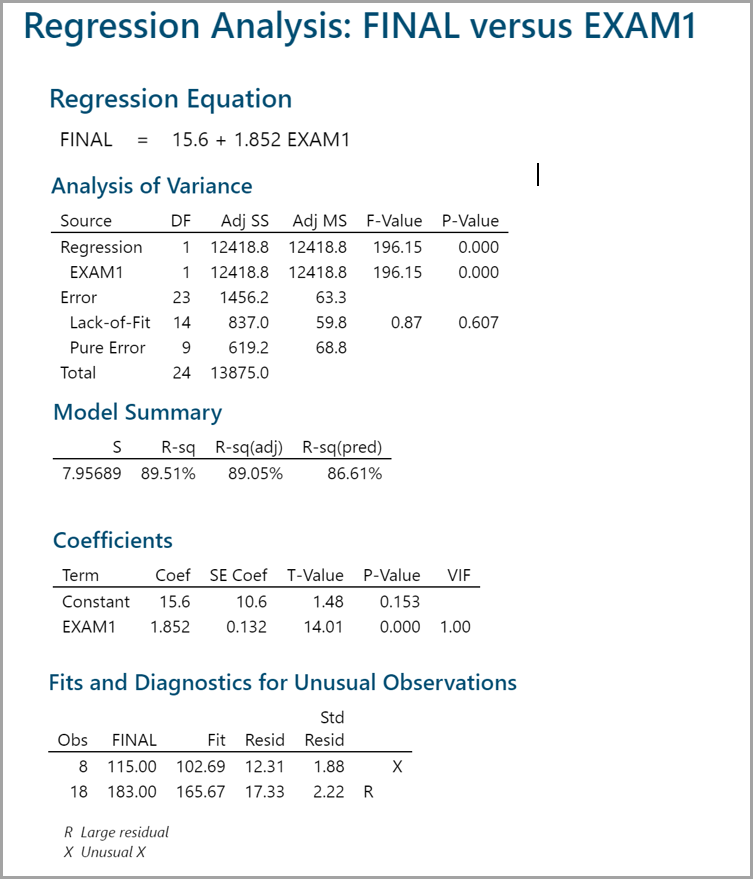 Let us say you are the professor and you want to use this prediction equation to estimate what two of your students might get on their final exam.

Because the model is significant, and it explains 89% of the variability, we can use the model to predict final exam scores based on the results of Exam1.

Let us assume the following:

Now apply the equation to each student:

Model summary: By simply replacing exam 1 scores into the equation we can predict their final exam scores. But the key thing about the model is whether or not it is useful. In this case, the professor can use the results to Figure out where to spend his time helping students.