The 80/20 rule basically reminds us that the comparison of inputs and outputs is not balanced. Vilfredo Pareto used the rule to explain how 80% of the property in Italy was owned by 20% of the country’s population. This rule can be applied to a wide variety of situations in manufacturing, management and human resources. Some examples for better understanding:

When you are trying to achieve top quality you need 100%. When optimizing your workforce, focusing on the few (20%) that are giving you issues is a timesaver. When you observe the 80% of the output stems from 20% of the input, the priority would be to focus on the few that generate the most results. The Pareto principle is a guideline to becoming more productive.

The Pareto principle helps us to focus on the vital few items that have the most significant impact. In concept, it also helps us to prioritize potential improvement efforts. Mr. Pareto is also credited for many works associated with the 80:20, some more loosely than others: Pareto’s Law, Pareto efficiency, Pareto distribution etc.

A Pareto chart is a chart of descending bars with an ascending cumulative line on the top. Sum or Count: The descending bars on a Pareto chart may be set on a scale that represents the total of all bars or relative to the biggest bucket, depending on the software you are using.

Percent to Total: A Pareto chart shows the percentage to the total for individual bars.

The Pareto chart output is created in a newly-generated window. Figure 1.31 depicts the Pareto chart generated by SigmaXL. It represents the count of defective products by team on a descending scale. The axis on the left references the count of defects. The cumulative percentages are represented by the data points driving the line that spans across the graphic, the axis on the right is the reference for the cumulative percentage line. 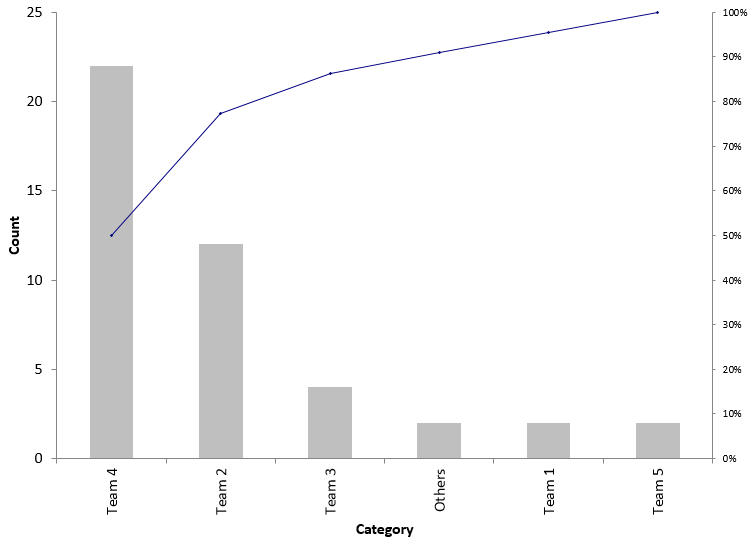 With this data and analysis, we were looking to determine how many defective products (i.e. effects) were created by each team (i.e. causes). As you can see, SigmaXL sorted the data in decreasing order. The team with the most defective products (team 4) was placed on the left. It’s also notable that the Pareto principal is present with nearly 80% of the defects being contributed by nearly 20% of the causes. Thus, the Pareto principle holds true.

The first-level Pareto was already demonstrated in figure 1.31. It showed the count of defective items by team. In that first level Pareto, we concluded that Team 4 accounted for 50% of the total number of defects. The next level Pareto will be a second level and will only show the defective items from Team 4 categorized in a logical manner or in a way that the data allows. 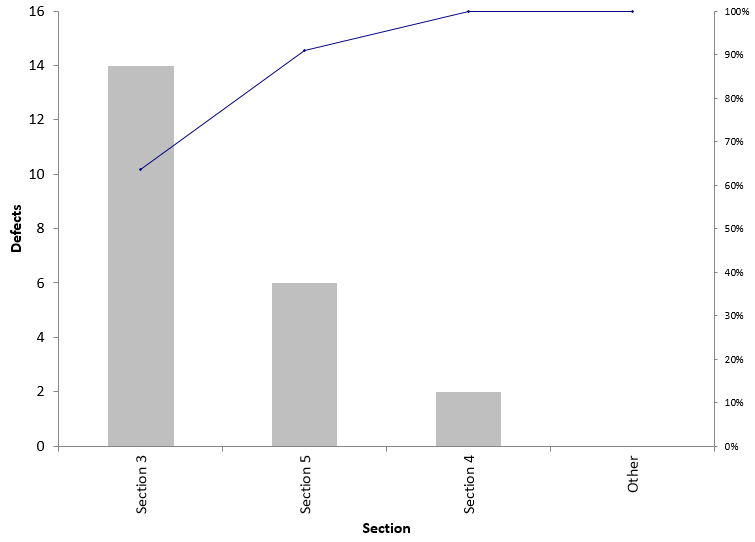 The second-level Pareto shows the count of the defective items by section for only Team 4 (22 defects). You can see that teams are broken down to sections and it appears that section 3 accounts for 63% of the total defects for team 4. 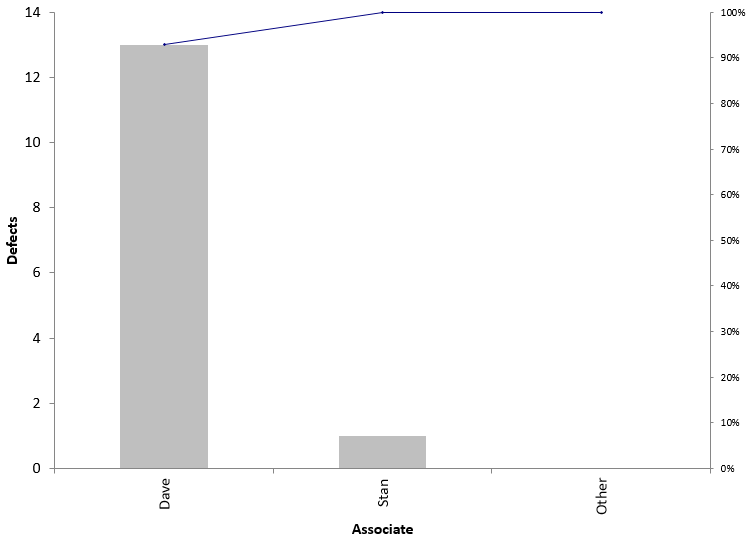 The third-level Pareto shows the count of defective items by associate for only Section 3 of Team 4. The total defects by associate sum to the total for Section 3 and Dave accounts for 93% of Section 3’s defects.

Model summary: Our analysis clearly shows the root of the problem being associate Dave who has 13 of the 14 defects in Section 3 of Team 4. Through this multi-level Pareto analysis, instead of focusing on all teams to reduce the number of defects, we discovered that we can focus on a single individual who is contributing 13 defects out of a total of 44 which is 30% of the total for all teams. Determining what Dave might be doing differently or wrong and solving that problem could fix about 30% of the entire defective products (13/44). This type of analysis significantly narrowed the focus necessary for reducing defective products.

Posted in Define Phase, How To, Six Sigma
← Pareto Analysis with MinitabMake a Histogram Using JMP →