What is One Way ANOVA?

One way ANOVA is a statistical method to compare means of two or more populations.

Assumptions of One Way ANOVA

ANOVA compares the means of different groups by analyzing the variances between and within groups. Let us say we are interested in comparing the means of three normally distributed populations. We randomly collected one sample for each population of our interest.

Based on the sample data, the means of the three populations might look different because of two variation sources.

ANOVA is a modeling procedure, which means we are using a model to try to predict results. To make sure the conclusions made in ANOVA are reliable, we need to perform residuals analysis.

Use Minitab to Run a One Way ANOVA

Case study: We are interested in comparing the average startup costs of five kinds of business.

Step 1: Test whether the data for each level are normally distributed.

Notice all of the p-values are greater than 0.05; therefore, we fail to reject the null hypothesis that the data are normally distributed.

Use the Bartlett’s test for testing the equal variances between five levels in this case since there are more than two levels in the data and the data of each level are normally distributed. The p-value of Bartlett’s test is 0.777, greater than the alpha level (0.05), so we fail to reject the null hypothesis and we claim that the variances of five groups are equal. If the variances are not all equal, we need to use other hypothesis testing methods other than one-way ANOVA. If this test suggested that at least one variance was different, then we would need to use a different hypothesis test to evaluate the group means.

Step 3: Test whether the mean of the data for each level is equal to the means of other levels.

Since the p-value of the F test is 0.018, lower than the alpha level (0.05), the null hypothesis is rejected and we conclude that the at least one of the means of the five groups is different from others.

Step 4: Test whether the residuals are normally distributed with mean equal zero. The residuals have been stored in the data table in step 4.

The p-value of the normality test is 0.255, greater than the alpha level (0.05), and we conclude that the residuals are normally distributed. The mean of the residuals is 0.0000. 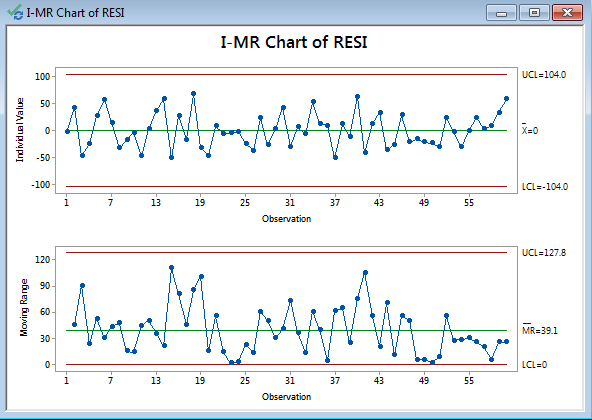 No tests failed; therefore, the residuals are independent.

Step 6: Plot residuals versus fitted values and check whether there is any systematic pattern.

Model summary: If the data points spread out evenly at any of the five levels, we claim that the residuals have equal variances across the five levels.