What is Multiple Linear Regression?

Both dependent and independent variables are continuous.

Use Minitab to Run a Multiple Linear Regression

Step 3: Check whether the whole model is statistically significant. If not, we need to re-examine the predictors or look for new predictors before continuing.

In this example, p-value is much smaller than alpha level (0.05), hence we reject the null hypothesis; the model is statistically significant.

Step 4: Check whether multicollinearity exists in the model.

The VIF information is automatically generated in table of Coefficients. 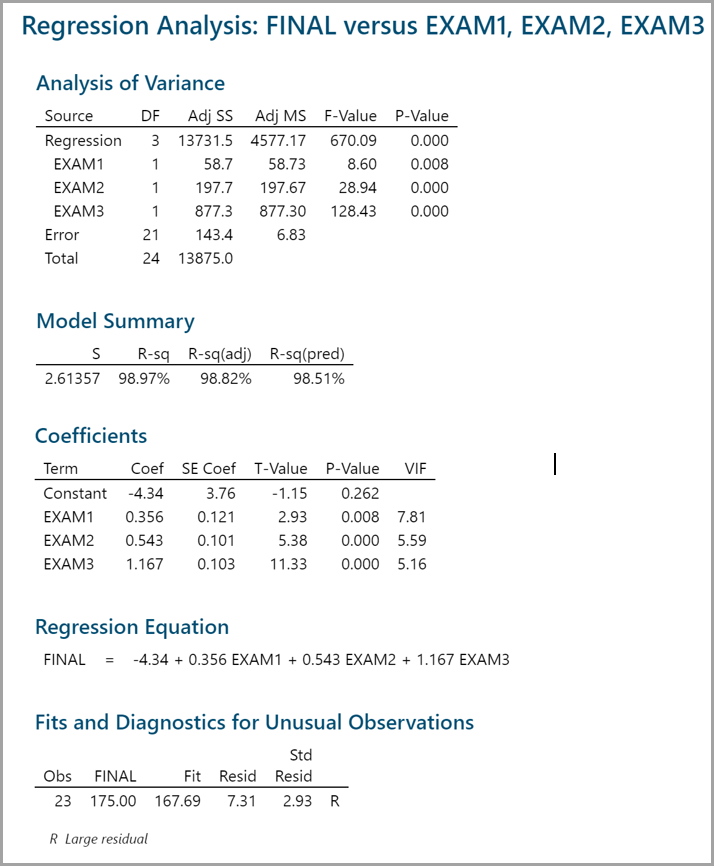 We use the VIF (Variance Inflation Factor) to determine if multicollinearity exists.

VIF quantifies the degree of multicollinearity for each individual independent variable in the model.

Two steps are needed to calculate VIF for X1.

Step 2: Use the R2 generated by the linear model in step 1 to calculate the VIF for X1.

Apply the same methods to obtain the VIFs for other X’s. The VIF value ranges from one to positive infinity.

How to Deal with Multicollinearity

In this section, we will focus on removing variables with high VIF and high p-value.

Note: we only remove one independent variable at a time.

In this example, all three predictors have VIF higher than 5. Among them, EXAM1 has the highest p-value. We will remove EXAM1 from the equation and run the model again. 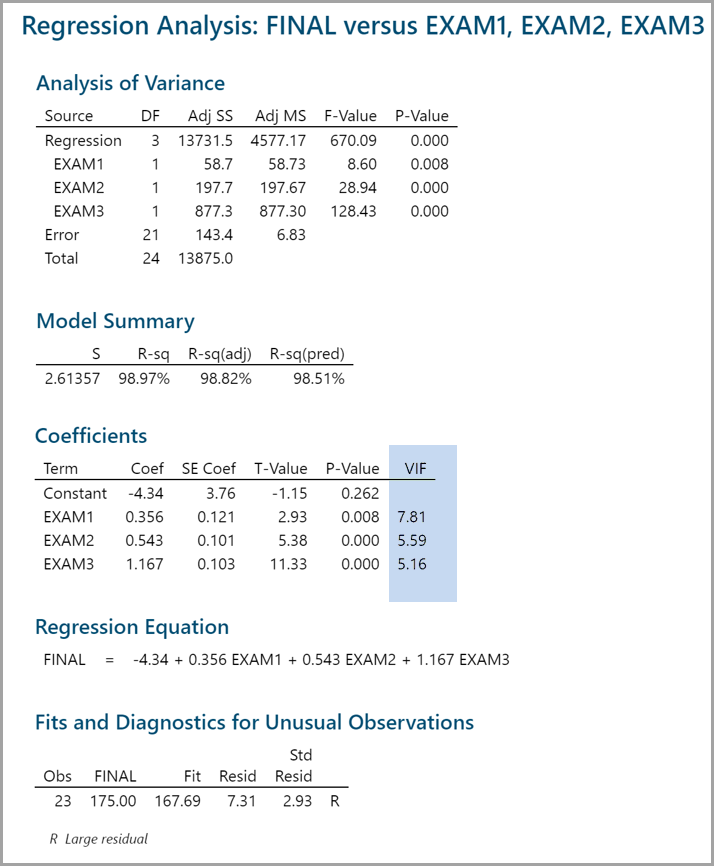 Check the VIFs of EXAM2 AND EXAM3. They are both smaller than 5; hence, there is little multicollinearity existing in the model. 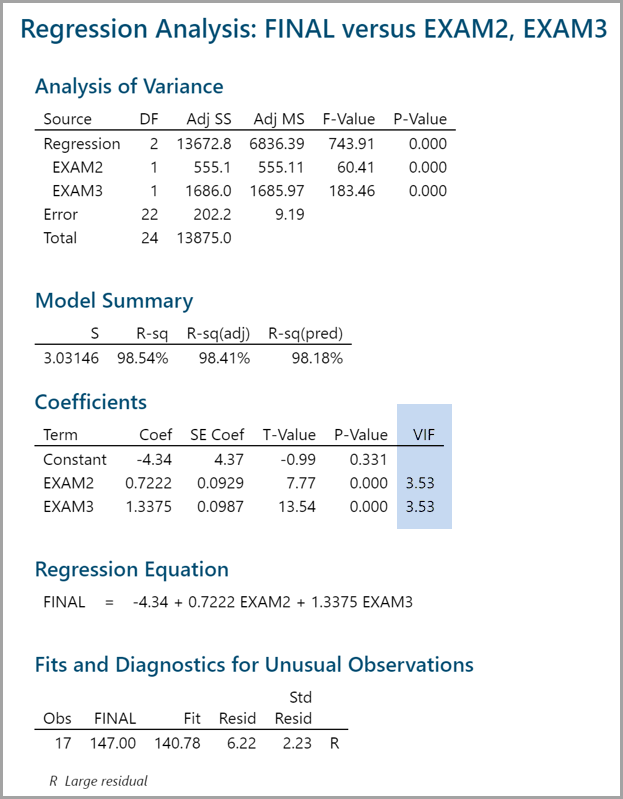 Insignificant predictors are the ones with p-value higher than alpha level (0.05). When p > alpha level, we fail to reject the null hypothesis; the predictor is not significant.

As long as the p-value is greater than 0.05, remove the insignificant variables one at a time in the order of the highest p-value. Once one insignificant variable is eliminated from the model, we need to run the model again to obtain new p-values for other predictors left in the new model. In this example, both predictors’ p-values are smaller than alpha level (0.05). As a result, we do not need to eliminate any variables from the model. 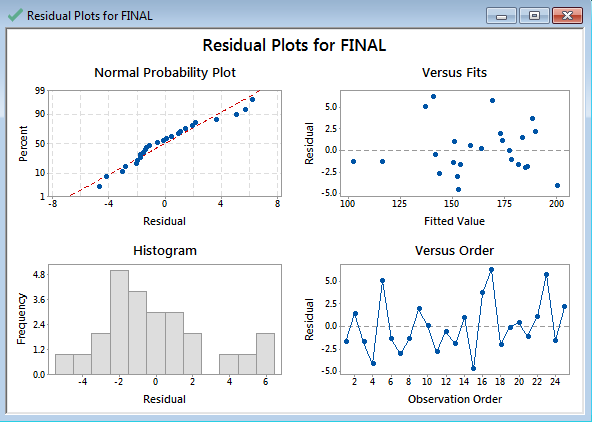 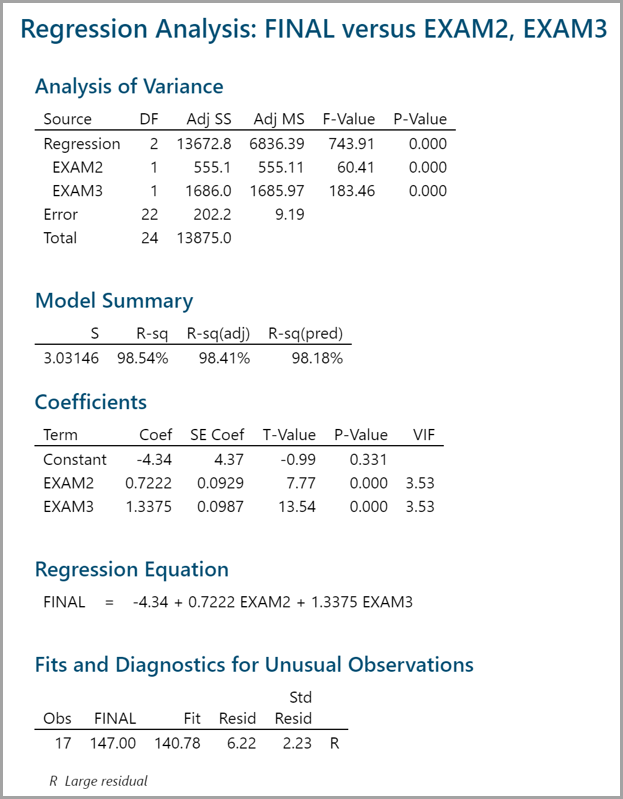 Now that we have removed multicollinearity and all the insignificant predictors, we have the parameters for the regression equation.

Let us say you are the professor again, and this time you want to use your prediction equation to estimate what one of your students might get on their final exam.

Model summary: Nice work again! Now you can use your “magic” as the smart and efficient professor and allocate your time to other students because this one projects to perform much better than the average score of 162. Now that we know that exams two and three are statistically significant predictors, we can plug them into the regression equation to predict the results of the final exam for any student.