When working with data sets in six sigma projects, often there will be a need to compare two groups to each other. A 2-sample T test is a hypothesis test is a hypothesis test to study whether there is a statistically significant difference between the means of two populations. The 2-sample T test runs a comparison of two categories within the same categorical variable, which becomes valuable when trying to answer questions that involve understanding the effects of the addition of a program or change to a sample of subjects.

How to Run a 2-Sample t Test in Minitab

In this example, we will be using a 2-Sample t data file for Minitab. Clicking the previous link will download the file for your use. Once you have the file open in Minitab we will be comparing the price of gasoline between State A and State B. We will use a data set assuming that each data set is normally distributed with equal variances. The hypothesis will be:
Null Hypothesis (H0): μ1 = μ2
Alternative Hypothesis (Ha): μ1 ≠ μ2

A new window named “Two-Sample t for the Mean” pops up.

Step 2: Click in the blank box next to “Samples” and the “Gas Price” appears in the list box on the left. 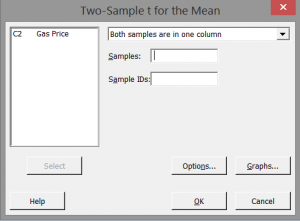 Select “Gas Price” as the “Samples.” 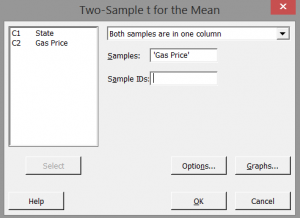 Step 3: Click in the blank box next to “Sample IDs” and the “State” appears in the list box on the left.

Select “State” as the “Sample IDs.” 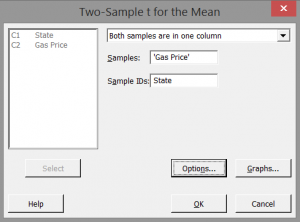 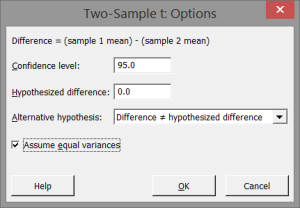 Results of our 2-Sample t Test:

The results for our study of how to run a 2-sample t test in Minitab (when σ1 = σ2) appear automatically in the session window after clicking “OK.” Minitab’s output is below. Take notice of a couple of important bits of information provided by the output. The mean of state A and state B, the number of data points for each state represented by ‘N’ as well as each standard deviation.

The key statistical output provided by Minitab when running a 2-sample t test is the P-Value. Since the p-value of the t-test (assuming equal variance) is 0.665, it’s greater than the alpha level of 0.05. Therefore we fail to reject the null hypothesis which was (H0): μ1 = μ2. Our conclusion in this case is that the means of the two data sets are equal.

Posted in How To
← Goal Setting: Key to Project SuccessProject Prioritization within Your Organization →