The history of Six Sigma finds its roots and terminology being first used by Bill Smith at Motorola in the late 1980s, as a quality management methodology. As the “Father of Six Sigma”, Bill forged the path for Six Sigma through Motorola’s CEO Bob Galvin who strongly supported Bill’s passion and efforts.

Starting from the late 1980s, Motorola extensively applied Six Sigma as a process management discipline throughout its company, leveraging Motorola University. In 1988, Motorola was recognized with the prestigious Malcolm Baldrige National Quality Award for its achievement in quality improvement.

Shortly thereafter, General Electric implemented the Six Sigma methodology under the leadership of Jack Welch in 1990s. GE extended Six Sigma by connecting it to results, as well as to executive compensation. GE also published financial benefits from Six Sigma in their annual reports. Six Sigma quickly became a widely adopted corporate practice and was implemented internally by many fortune 500 companies as an effective way of improving business performance. 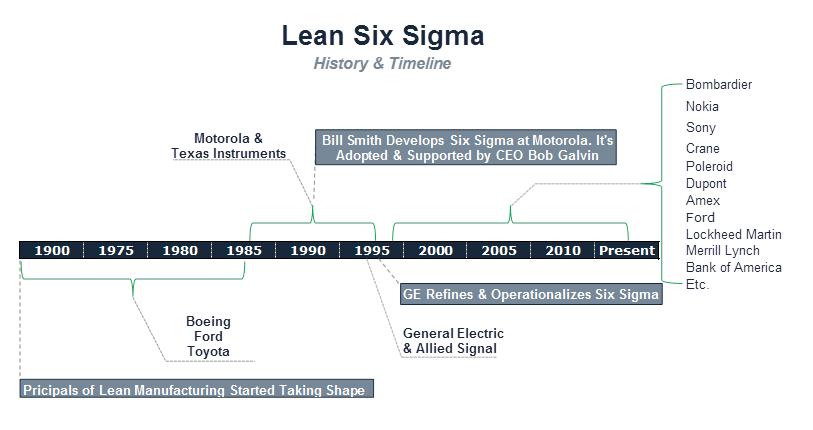 Most Six Sigma programs also cover the aspects, tools and topics of Lean or Lean Manufacturing. Six Sigma and Lean are quite complimentary and work hand in hand drawing from each other’s strengths and together offering unmatched benefits to those who follow these disciplined approaches. Six Sigma is heavier on the analytics and focuses on minimizing process variability, shifting the process average and delivering within customer specification limits.

Lean takes a fundamentally sound and practical approach to focusing on eliminating waste and increasing efficiency. Lean, and its own popularity relative to the history of six sigma, began to crest and gain significant traction in the mid 1960’s with the Toyota initiative “TPS” or Toyota Production System. The concepts and methodology of Lean however, were fundamentally applied much earlier by both Ford and Boeing in the early 1900s.

Because both Six Sigma and the revitalization of Lean have been only as recent as the last 30-50 years, Lean Six Sigma and its history continues to be written with every new deployment and company or organization striving to improve their business performance.

Posted in Six Sigma
← What is Six Sigma?Six Sigma Approach →

Michael Parker is the President and CEO of the Lean Sigma Corporation, a management consulting firm and online six sigma training, certification and courseware provider. He has 15 years of experience leading and executing lean six sigma programs and projects. As a Fortune 50 senior executive Michael has had oversight of project portfolios as large as 150 concurrent projects exceeding $100 million in annual capital expenditures. Michael has also managed multi-site operations with accountability of over 250 quality assurance managers, analysts and consultants. He is an economist by education earning his Bachelor of Science degree from Radford University while also lettering 4 years as an NCAA division I scholarship athlete. Michael earned his Six Sigma Master Black Belt certification from Bank of America and his Black Belt certification from R.R. Donnelley & Sons.