This Figure demonstrates the relationships between variables as the Pearson r value ranges from 1 to 0 and to −1. Notice that at −1 and 1 the points form a perfectly straight line.

Correlation does not imply causation.
If variable A is highly correlated with variable B, it does not necessarily mean A causes B or vice versa. It is possible that an unknown third variable C is causing both A and B to change. For example, if ice cream sales at the beach are highly correlated with the number of shark attacks, it does not imply that increased ice cream sales cause increased shark attacks. They are triggered by a third factor: summer.
This example demonstrates a common mistake that people make: assuming causation when they see correlation. In this example, it is hot weather that is a common factor. As the weather is hotter, more people consume ice cream and more people swim in the ocean, making them susceptible to shark attacks.

Statistical Significance of the Correlation Coefficient

Hypothesis tests will produce p-values as a result of the statistical significance test on r. When the p-value for a test is low (less than 0.05), we can reject the null hypothesis and conclude that r is significant; there is a correlation. When the p-value for a test is > 0.05, then we fail to reject the null hypothesis; there is no correlation.
We can also use the t statistic to draw the same conclusions regarding our test for significance of the correlation coefficient. To use the t-test to determine the statistical significance of the Pearson correlation, calculate the t statistic using the Pearson r value and the sample size, n.
Test Statistic

Critical Statistic
Is the t-value in t-table with (n – 2) degrees of freedom.
If the absolute value of the calculated t value is less than or equal to the critical t value, then we fail to reject the null and claim no statistically significant linear relationship between X and Y.

We are interested in understanding whether there is linear dependence between a car’s MPG and its weight and if so, how they are related. The MPG and weight data are stored in the “Correlation Coefficient” tab in “Sample Data.xlsx.” We will discuss three ways to get the results.

Use Excel to Calculate the Correlation Coefficient 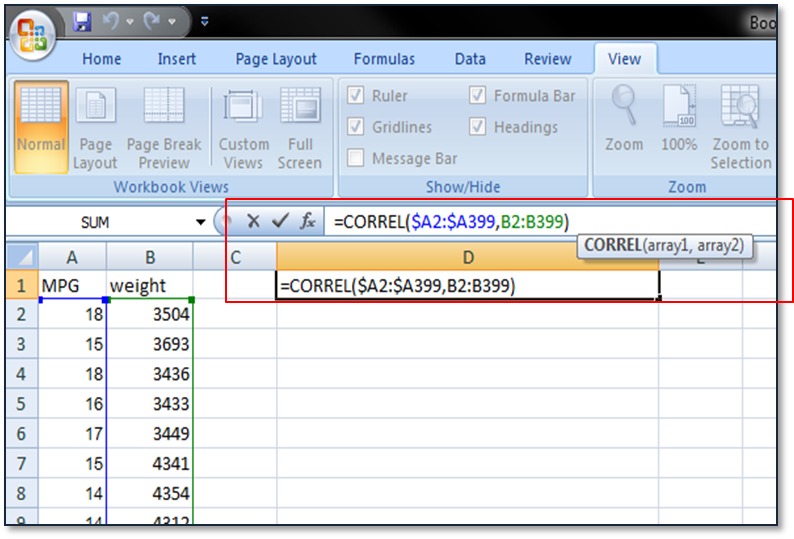 Use Minitab to Calculate the Correlation Coefficient

Step 2: Select the two variables of interest in the pop-up window “Correlation” and click “OK.” 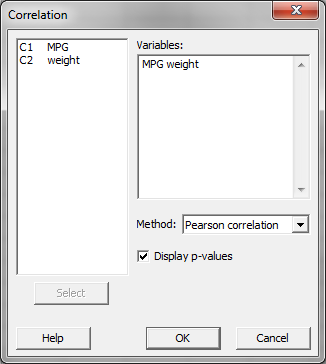 The correlation coefficient result (−0.832) appears in the session window. The p-value (0.000) is lower than the alpha level (0.05), indicating the linear correlation is statistically significant. We can claim that there is a linear relationship between mileage and weight.

How do we interpret results and make decisions based Pearson’s correlation coefficient (r) and p-values?

Let us look at a few examples:

Model summary: It is only defined when the standard deviations of both X and Y are non-zero and finite. When covariance of X and Y is zero, the correlation coefficient is zero.